I take a lot of notes and it was becoming a real headache to organise and revise things I had studied. I’ve been eyeing the e-ink tablet market since Remarkable launched a few years ago. The lack of a backlight and a recently introduced subscription model drove me to go for a Boox Note Air 2 instead.

Here’s my experience of using the tablet for 6 weeks. 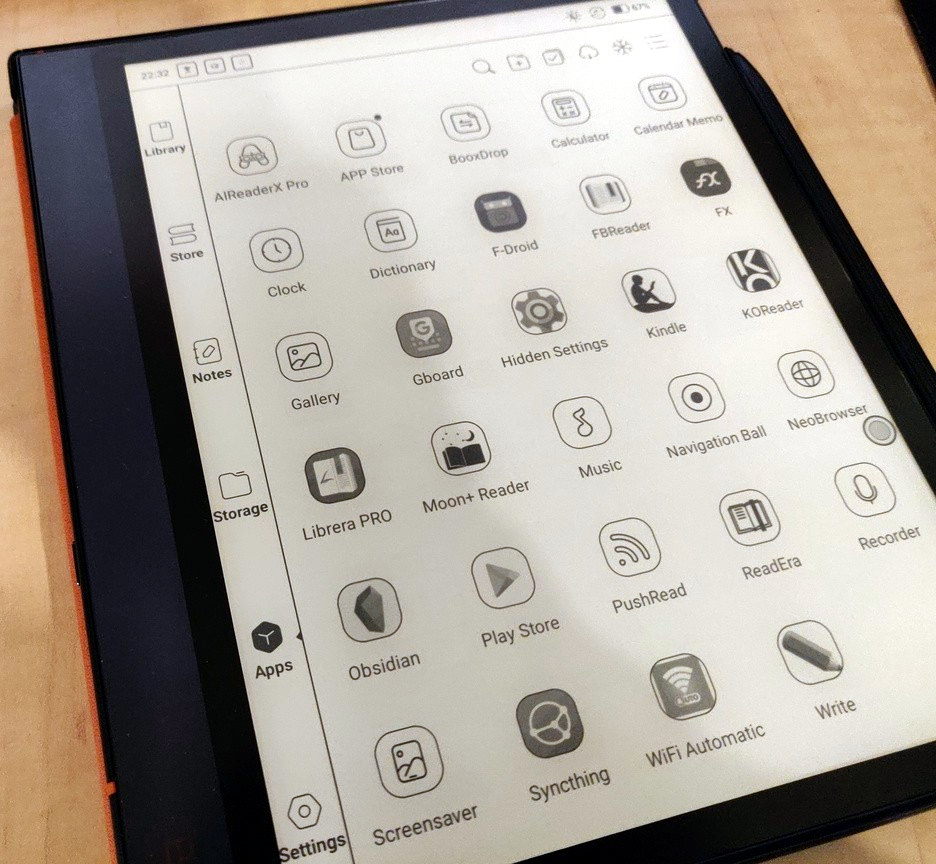 The first thing I noticed as I was unboxing was that the pen nib was bent and crushed (see update at end of this section). This caused issues during the calibration process for the stylus, and I could write on the device with the tip hanging 1 cm in the air. 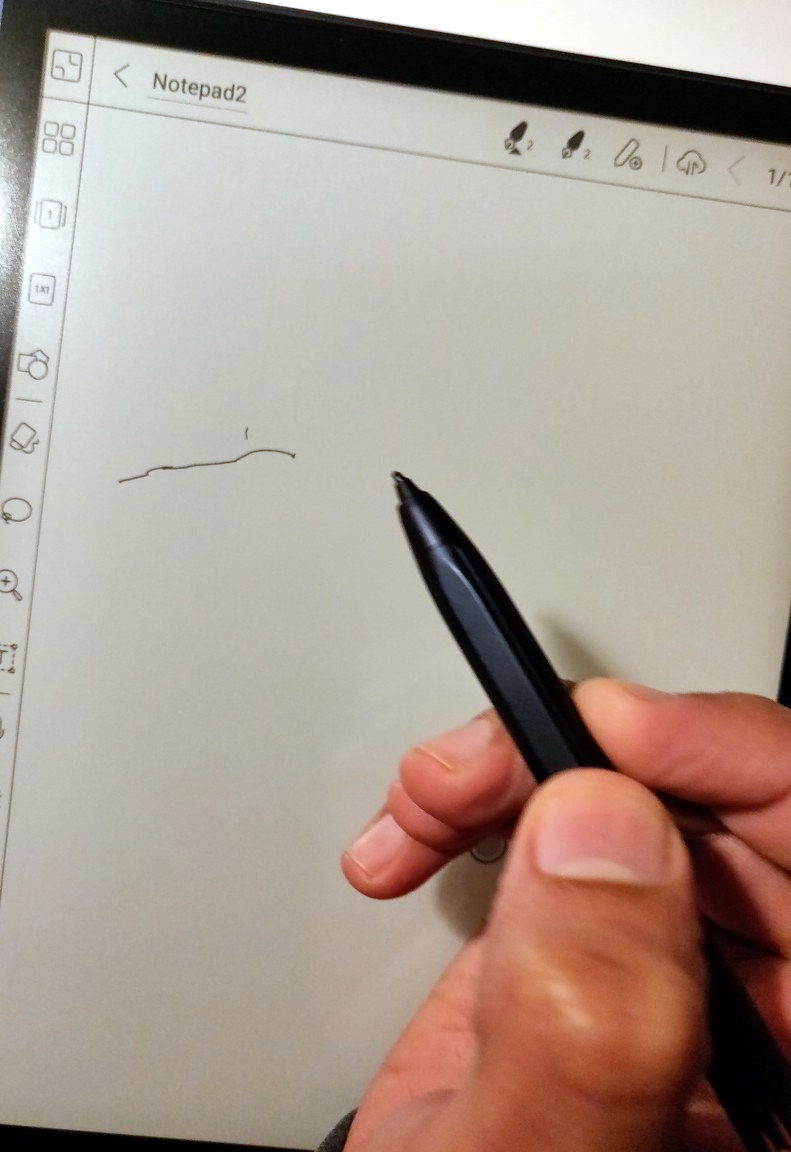 I came across a post on Reddit discussing this problem and the likely culprit is that the pen is not secured in the box and the pen gets damaged during shipping.

I got in touch with the seller and they shipped a set of nibs right away and in a couple of days; I had a working pen. It’s not the best experience out of the box, and Onyx should find a way to ship the pen so the nib doesn’t get damaged.

Update: Onyx commented on Reddit that a rubber protector was added to the pen to prevent damage during transit.

The device looks beautiful with orange highlights and a flush bezel. My device shipped with a grey (outside) and orange (inside) book folio case. There is, however, a huge design flaw with the case. The spine covers the side USB-C port on the tablet, and it’s not possible to charge the tablet when the case is closed. 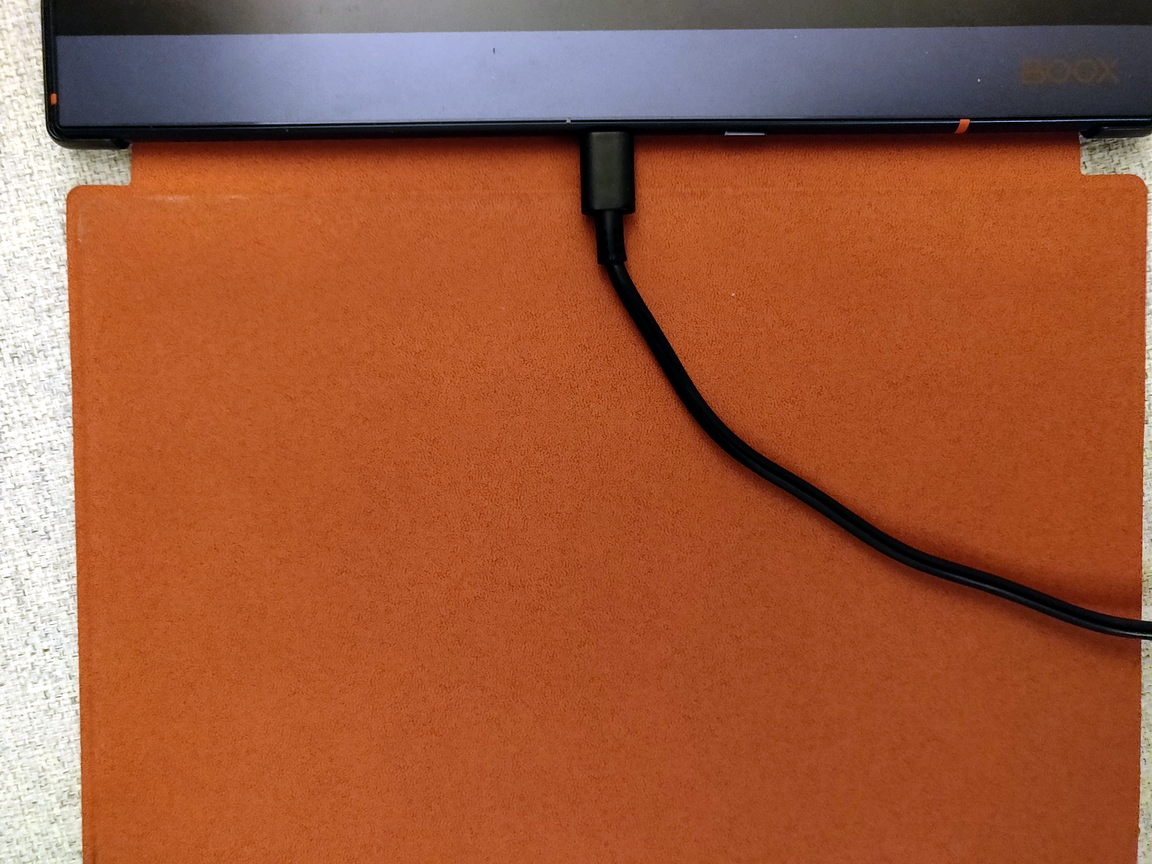 The case is gorgeous but is of subpar quality. The corner plastic clasps securing the tablet in the case have already started falling apart for me, and I came across more reports on the Boox subreddit with similar problems. I’ll be getting a third party case.

Update (May 2022): My case is now completely bust. Another corner broke on the case. I’m getting a third party case from Etsy.

The e-ink display is a delight to read on. It’s front-lit and does not cause eyestrain.

Along with a setting to adjust the light brightness, it’s also possible to choose between warm and cool lighting. It’s dark this time of the year here in the Netherlands and I’ve stuck to a warm mild colour.

The Note Air 2 has Bluetooth (for headphones or keyboards or anything you can use an Android device with), WiFi (5GHz) and a USB-C port. I hoped there would be MHL connectivity to use the device with an external monitor but it’s neither mentioned anywhere in the specs nor could I make it work.

The magnetic pen attaches snugly to the side of the tablet.

The pen has no eraser (there’s a digital eraser, which I find cumbersome to switch to). There is an upgraded Pro version of the pen available for purchase separately. I wish Onyx had been generous and shipped a pen with an eraser. I honestly don’t fancy the idea of splurging on a second pen just to have an eraser.

Writing is (almost) as fast as writing on an actual piece of paper with a very realistic feel. There is (naturally) a tiny lag before the text appears on the screen and it’s only noticeable if I pay attention.

After about a month of use, my nib looks worn out (I use too much pressure while writing), but I haven’t replaced it yet.

I’ve been looking for an alternative stylus but I haven’t found the right combination of features that I’d want in a stylus: magnetic, cap, and an eraser.

The tablet boots to a standard first-time setup which guides through a few device options.

I noticed some untranslated text (Chinese) in a couple of menus. This was fixed once I installed the software update.

I occasionally come across typos or formatting errors that give the software an unpolished feel. Some examples of such inconsistencies (highlighted in red):

Example 1: No space before bracket: 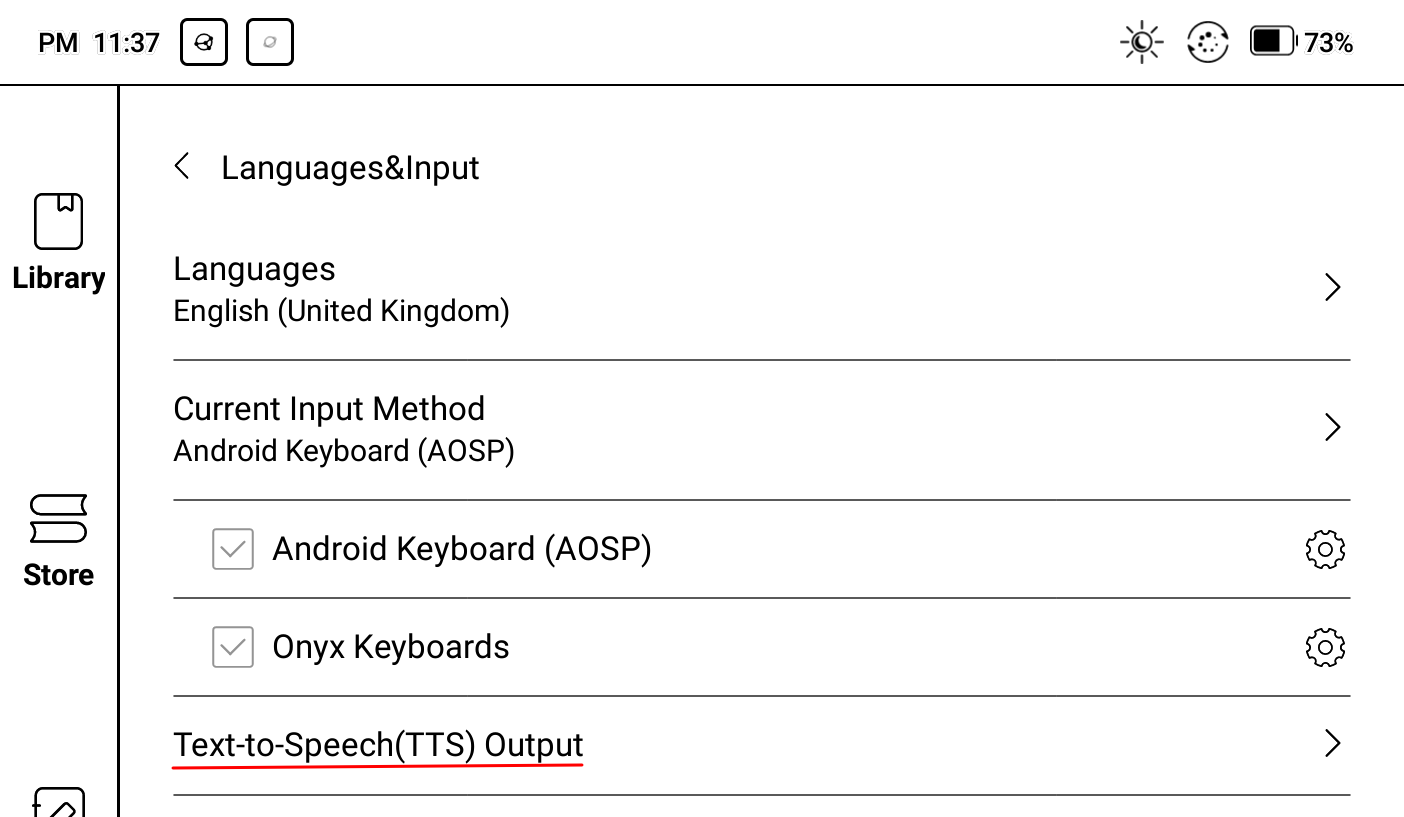 Example 3: Inconsistent date formatting, the date has a 0 padding, but the month doesn’t

This doesn’t affect how the device functions, but simply lacks a certain polish that I notice.

The Boox, well, lets me read books. After configuring my library, I ran into a couple of issues:

I opened two A4 documents side by side in horizontal mode and I could read the text. Although it’s not the most convenient setup to read two documents of this size on a 10.3" screen, I could do it with no squinting. Annotating the documents in this mode follows the active window and I could annotate both documents at the same time.

I haven’t tried it yet, but it could be a very handy mode to read a book and take notes at the same time.

I have also taken the Note Air 2 to bed for my bedtime reading. It’s a 10.3" tablet, and that’s not a comfortable size to hold for long without getting tired.

I’ve been reading using the tablet for the last couple of weeks and some things that need improvement.

They can improve the library and reading experience a lot more.

While I can use other Android apps for reading books, I haven’t found a third party app yet that I like, since third-party apps are built for colour tablets, not for e-ink tablets.

A big advantage of the Onyx ecosystem is that the tablets are based on Android, and thus I can get access to the Android ecosystem of apps. Google Play is not installed by default, since e-ink tablets can’t be certified by Google.

So, after what seems like a hackish but well-described workaround by Onyx to get around this limitation, I got the device running the Play Store right away.

Note-taking: As a notepad

I’ve been using the tablet to take notes almost daily. It works great, but there’s a learning curve to understand the options available in the notepad.

The UI navigation elements are only icons and in some places, it’s possible to long tap to get a tooltip about the icon’s function. This long-press functionality is missing in some places. Here is one example (while taking notes in full-screen mode):

Onyx stores notes in its internal format. There is an option to “save notes as PDF” when exiting a notepad, which I love as I can sync the folder using Syncthing to my other devices and access the notes from anywhere.

OCR is very accurate, and I was frankly surprised by how well it worked with my cursive handwriting. It’s the software that could use a bit of extra heuristic and make the recognition a lot better.

When I use lined templates, it doesn’t work well if the descender intersects with the content of the line below it (Descender is the part of a letter that hangs below the baseline, e.g.: for the letter p, the part below the “o” is the descender). 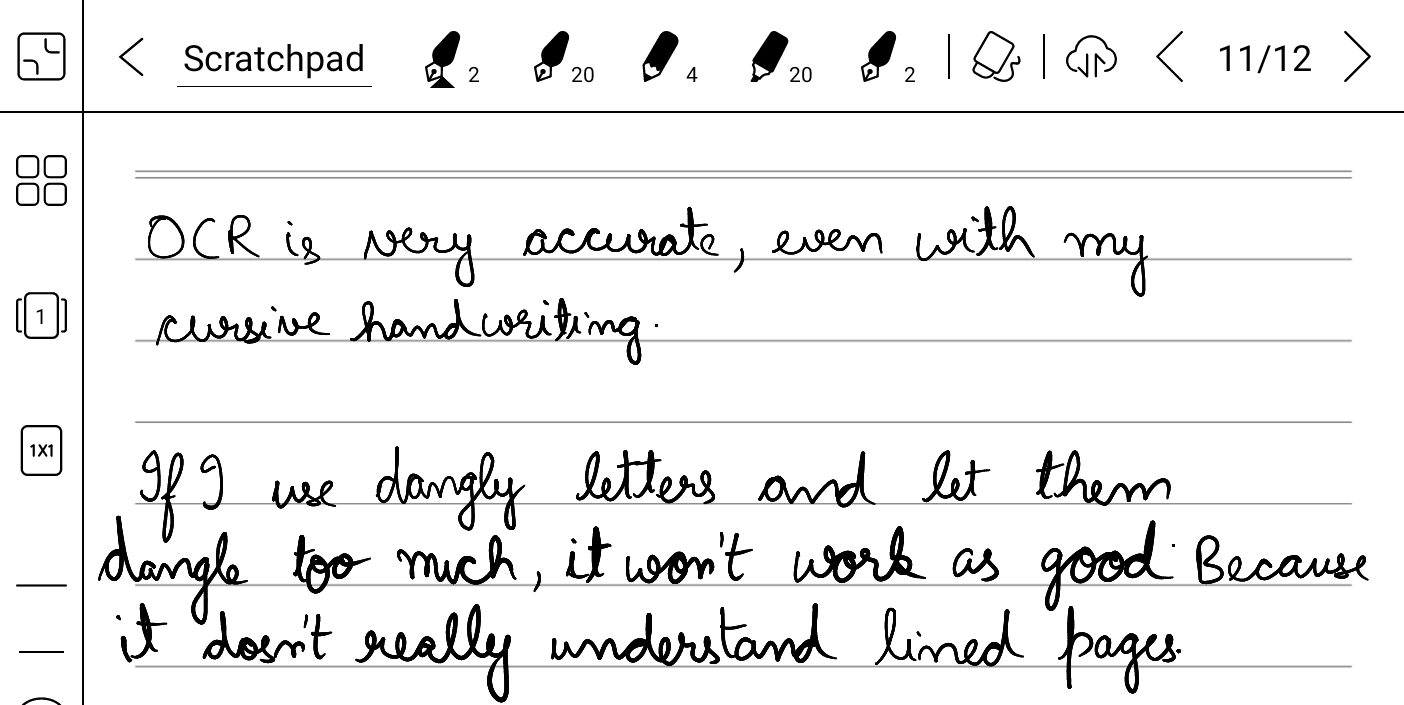 There are 59 supported languages for handwriting recognition. There’s no support for any Indian language. It’s a pity Indian language users are not their target audience.

Note-taking: As a keyboard

I had hoped this would be a pretty nifty feature. So I could write with my pen and get it converted to digital text on the fly. The writing area while using the keyboard is the same as where on-screen keys would normally be: a small part of the screen.

I constantly had to lift the pen, so it’d recognise the text on the screen and then I could begin anew. It’s the equivalent of using a typewriter and having to go back to the start after every sentence. This experience was too slow for me, so I only used it once and not again.

I’ve been charging my Boox once a week, which is pretty impressive with how much I’ve been using it. I keep the WiFi off, which helps it last a lot longer than if I kept the WiFi on 24x7.

The Boox promises to be a general-purpose e-ink tablet, but for me, it doesn’t exactly live up to that challenge. It fulfils what I needed it for (taking notes digitally). What doesn’t work that well: OCR on notes, using the device as an e-reader, or the handwriting keyboard. These are things that will (hopefully) improve in the future with more software updates, but it’s something I don’t care about. If your primary use case is more than notes, I’d steer clear of the Boox tablet. As a note-taking tablet for occasional book-reading, it works perfectly for me.